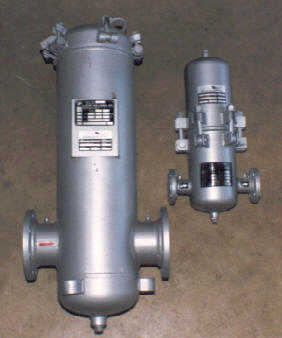 Frederick Logan Company, Inc has been a distributor for North American Filter Corporation since 1987. NAFCO manufactures air, gas and liquid pipeline filters (pressure and vacuum), air intake filters and breathers for use in general manufacturing and process industries including:

North American Filter Corporation was founded in 1984 and was incorporated in the state of New York. The company’s beginning was based on the principle of superior filtration design with the introduction of several patented filter products offering our customers significant filtration advantages. These patents are still in force today. North American Filter Corporation has continued its strong tradition of innovation with its continuing aggressive research and development activity and has several additional patents in place.

In March of 2000, North American Filter Corporation was purchased by the existing senior management and remains an aggressive innovator and quality provider of a broad range of industrial filtration products.

ENGINEERING – We have the design and engineering ingenuity to meet virtually any industrial filtration need. Our modern solid modeling CAD design engineering system ensures a quick turnaround of proposals for design and formal order documents.

RESEARCH and DEVELOPMENT – We are committed to innovative thinking to give customers a competitive edge in the marketplace. We realize the key to our success is having a research and development team that can work with customers to develop new filters exclusively designed for their application as well as re-engineer existing products. North American Filter’s laboratory includes a multi-pass test stand and wind tunnel. This, combined with two laser particle counters, gives us the ability to test both liquid and air gas phase filters. North American Filter Corporation has the ability to provide you with fluid contaminant testing and particle profiling, air filter testing for pressure drop, dirt holding and particle efficiency, Frazier testing, bubble point testing and microscopic analysis.

NAFCO has the ability to supply pressure vessels for air, gases and liquids, to globally recognized standards including: